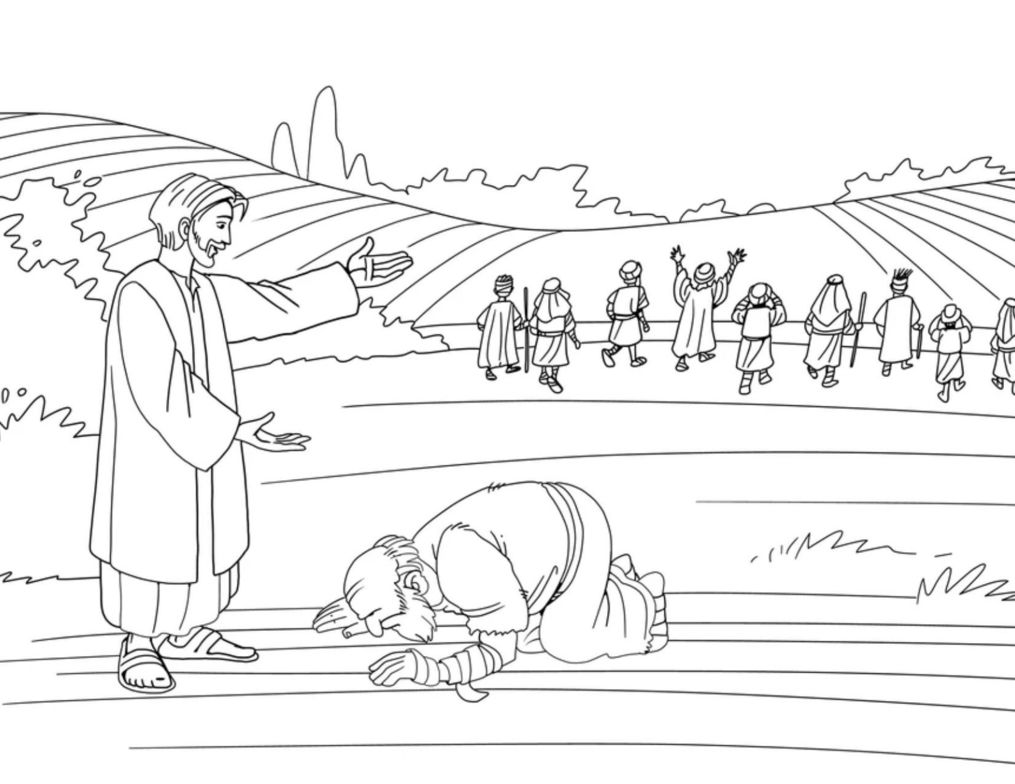 On the way to Jerusalem Jesus was going through the region between Samaria and Galilee. As he entered a village, ten lepers approached him. Keeping their distance, they called out, saying, ‘Jesus, Master, have mercy on us!’ When he saw them, he said to them, ‘Go and show yourselves to the priests.’ And as they went, they were made clean. Then one of them, when he saw that he was healed, turned back, praising God with a loud voice. He prostrated himself at Jesus’ feet and thanked him. And he was a Samaritan. Then Jesus asked, ‘Were not ten made clean? But the other nine, where are they? Was none of them found to return and give praise to God except this foreigner?’ Then he said to him, ‘Get up and go on your way; your faith has made you well.’ (Luke 17.11–19)

Good morning to each of you. My name is Robert Smith. I am the Director of Briarwood Leadership Center, a ministry in mission together with the Northern Texas-Northern Louisiana Synod.

I am also an Associate to the Bishop of our Synod, who I understand you know rather well.

Thanks to Trinity for your long-standing support of Briarwood. We are in the midst of many changes and expansions, not unlike a building project; I hope that we can speak more directly about the Leadership Center in the times between worship services.

I look forward to many more years of partnership with the purpose of implementing God’s will for the sake of the world God loves.

Thanks especially this morning to Pastor Mohn. She has offered her pulpit to me and that is no small risk!

Today, we’re going to be talking a lot about leprosy. Because it is mentioned throughout the Bible and in other ancient sources, leprosy can seem like a mythical disease of the skin.

Unfortunately, it is very real: the World Health Organization tells us that over 200,000 new leprosy cases were registered globally in 2018. Throughout history, and continuing until today, people living with leprosy have been ostracized by their communities and families.

When the Bible tells stories about Jesus and leprosy, we’re not talking about the distant past alone. Because we so often imagine a mythical, distant past, this Gospel passage is often interpreted and preached like a morality lesson:

Those lessons – those expressions of Law – can drive us further into our fear. Because, most often, we are not like Jesus.

And if our interpretation of this story doesn’t release us from fear – of leprosy, or of God’s judgement – they do not bring healing and liberation to those stigmatized and ostracized by their communities and families.

Those are lofty goals aren’t they? When we look around at the world today, it’s difficult to imagine what it might be like to live within God’s own order. And if we’re told that we have a responsibility for bringing about that revolution, we might feel a bit emotional. We might feel like crying.

Last week, as we ended an Anti-Racism workshop for the 2019 NT-NL Leadership Convocation at Briarwood, our convener, Prof. Taurean Webb, shared a devotion from Howard Thurman.

A philosopher and theologian, Thurman was a key mentor to Martin Luther King, Jr. I’ll read that devotion to you now and then share some reflections on how the theme of leprosy and tears might apply to our world today:

A friend of mine was given an assignment in a class in dramatics. Each time she tried to read her selection aloud before the class, tears came and her strong emotional reaction made it impossible to go through with it. One day the teacher asked her to remain after class for a conference.

The essence of the teacher’s words to her was this: “You must read the selection before the class tomorrow. I understand what is happening to you and that is why I insist that you do this tomorrow. It is important that you realize that you must read this selection through, crying every step of the way, perhaps, if you expect to read it through without trying.”

St. Francis of Assisi, in his youth, found it impossible to control his deep physical and emotional revulsion against leprosy. So acute was his reaction that he could not ever run the risk of looking at a leper. Shortly after he had made his first commitment to his Lord, he was riding down the road, when suddenly there appeared a leper. Instinctively, he turned his horse around and went galloping off in the opposite direction, his whole body bathed in nervous sweat.

Then he realized what he was doing. Leprosy was one of the things he could not stand—as long as that was true, leprosy would be his jailer, his master. He turned around as abruptly as before, found the leper and, according to the story, remained with him, living intimately with him until every trace of his previous reaction had been mastered.

Thus freed, he could be of tremendous service to the victims of the disease. You must go through some things, crying all the way; perhaps, if you are ever to live with them without crying. This is an important law of living.

There are many experiences which we face that are completely overwhelming. As we see them, they are too terrible even to contemplate. And yet we must face them and deal with them directly. We chide ourselves because at first we tend to go to pieces.

Whatever step we take toward enacting God’s will and reign in the world, it takes a lot of hard work. If we’re going to be involved in bringing healing and liberation to lepers by standing against social stigma and rejection, we will need to build coalitions with people living with leprosy.

I’ll admit that leprosy isn’t the top priority in northern Texas. But we know different groups of people whose bodies are no less stigmatized and ostracized. We can think of …

It is in the context of marginalization and stigma that Jesus reflects on the relative privilege of those who walk away. Of course we were healed. The social safety net worked for us. Let’s go about our business.

But the person who was doubly marginalized—both a leper AND a Samaritan foreigner—turns to recognize, to see Jesus as Jesus has seen him.

Jesus does not require expressions of gratitude. He needs no receipts for his charity. He simply sends this person on their way, equal to the others.

Indeed, healing and wholeness, social restoration and inclusion, are the deeper points in this story – not the question of who is sufficiently grateful and who is not. Immediately after this scene in the docudrama that is the Gospel of Luke, we hear about what it will be like when the reign of God comes into the world.

If we seek the reign of God, we seek harmony and all good things, for ourselves and for our neighbors.

But there is a hard truth we must confront.

This Kingdom, this realm, will smash hierarchies and destroy walls of division, the order of the world as we presently know. That will mean a loss of power for some as the valleys are raised and the mountains brought low.

For the ELCA, the whitest denomination in the United States, that means something. It means that we are going to be challenged. And that can bring fear. But it is fear we must work through, fear we must endure (as Paul says to Timothy). For the reward is great.

This is God’s work, being accomplished in our midst. Leprosy is a great leveler, manifesting a stark image of death. Being in the presence of God is another leveler; Jesus is the great leveler.

And we have a secret to share with the world: the love of God in Christ Jesus is here today, bringing a foretaste of the feast to come.

The Word and will of God is present in the Sacraments of Baptism and Communion. There, we see that the most basic elements can be empowered, through God’s word, to bring everlasting wholeness, healing and life.

There will be tears. It will involve suffering. Resurrection presupposes death. “Go to pieces then. Weep all the way through the first terrible impact, if need be. This may be the only way that you will ever be able to deal with the problem without emotional upheaval.”

That takes leadership. That’s what we have started to do at Briarwood Leadership Center, in partnership with the NT-NL Synod. We have set before ourselves no modest task: defeat racism and fear of the Other in north Texas; to defeat homophobia, trans-phobia, religiously-sanctioned bigotry and extremism, patriarchy, and white supremacy.

Our task is to tackle all of this as an interlocking, systemic structure designed to concentrate unholy power in the hands of a few at the expense of the many.

We can engage this monumental task because we have the hope of God within us, because God’s Word and will are already working within us, because the reign of God is at hand. This is what we’re up to at Briarwood Leadership Center. I’m glad to know that you are with us on this journey.